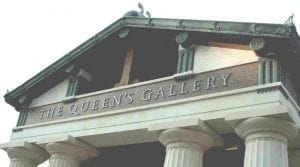 Throughout 2001 and 2002 Ossett Mouldings Limited made, supplied and installed some products to this very high profile project.

On completion, Her Majesty The Queen opened this completely new annexe to her palace as part of her 2002 Golden Jubilee celebrations.

These products, detailed below were manufactured in cast resin and Glass Reinforced Cement (GRC). Unusually for our company no plaster castings were made, although many workshop patterns were formed in this material. Please note – this photo to right is used here as a “signboard”, we did no work to this exterior!

As is customary in the construction industry, we worked as a sub contractor, not directly for the client. The client in this case was the quaintly titled “Keeper of the Privy Purse”.

In this page we will describe as interestingly as possible for you our small part in this project of which we are naturally quite proud. 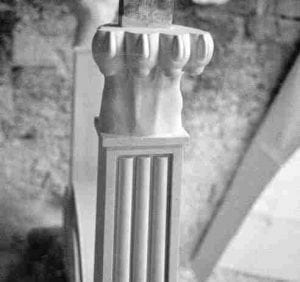 Entrance Desks. We “merely” made cast cement components for these four items. Our contractor planned, made many parts, co-ordinated, assembled, delivered and site installed the completed desks.

In turn we employed an excellent, first class sculptor to create many of the elements you see in these illustrations such as claw feet, diminishing flutes, enriched ends (which had to match the column capitals, below) also tassels. 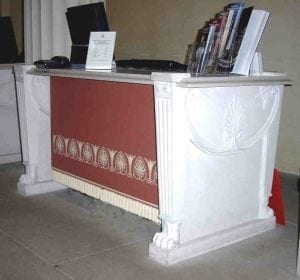 Even so, this left us with a great deal of work in pattern-making, mould-making, quite difficult casting and sub assembly.

As our components were intended to mimic carved portland stone, these were unpainted. This imposed further difficulties, for example colour control onto the moulding, casting and finishing processes.

Apart from the entrance portico, pictured above, constructed by others, these desks are often the first item visitors to the Palace will encounter or notice. After a year of extraordinarily heavy use, they appear to be wearing very well indeed.

The four desks varied in design, compounding the practical difficulties, but as you can see, these eventually became super little desks! Albeit (intentionally) very heavy! 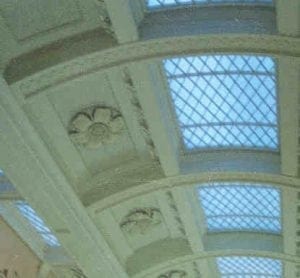 While appearing to be “just holes”, these were in fact very difficult to produce. Believe me, the simple term “curved in one plane” doesn’t begin to describe the geometric horror we so correctly foresaw! 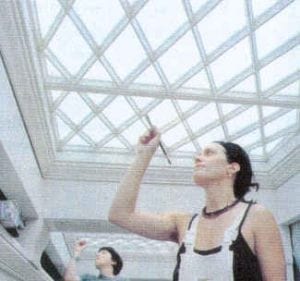 Obviously the setting out, while difficult was achieved, as were the many other practical difficulties, both anticipated and unforeseen, including some complex chemical interations between materials.

These panels were each cast in very large sections indeed, approximately 2500mm by 1500mm. Twenty one panels in total to this one ceiling. All at approximately eight metres from floor level.

Given the enormous amount of time, effort, cash and emotion that was expended upon these items, it is a great pity these huge panels are fitted so very high up and largely disregarded by visitors. 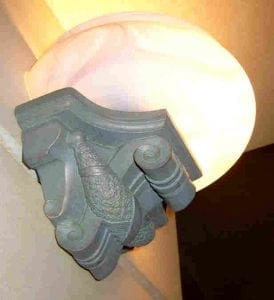 Some small examples of these existed already within the palace. We were required to replicate many more of these, also to create some larger matching examples. 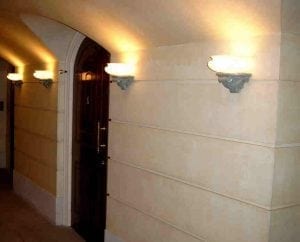 One original was moulded, from which mould numerous more examples were produced in cast resin material, all incorporating a heat sink and integral “air flow” ventilation.

The same excellent sculptor modelled a much larger example as required by our client. This in turn was also moulded and the required number produced.

Our contractor fitted glass bowls, lighting equipment, decorated them with a very convincing metallic “patina” and installed them onto site.

Yet again, as you can see, these also look exceptionally good, a fine example of co-operation between several companies. 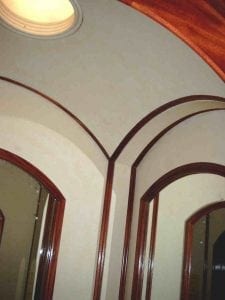 Another apparently insignificant item, certainly unnoticed despite being very close to the public gaze.

Cast in resin with a plain surface, this was also deceptively difficult to plan, plot, patternmake, mould, cast and install.

The design continued the “Soanian” scheme of the ceilings in the adjoining corridors with the added difficulty of requiring to accurately “couple” with the immediately adjoining components to centre and edge which were in different materials from two remote manufacturers.

As an indication of the very tight margins in this small car, the ceiling required to be “tried up” for trimming some 32 times during installation before it fitted perfectly into place! However, just like the other items on this page (and throughout this site), it certainly was eventually worth the considerable effort we put into it! 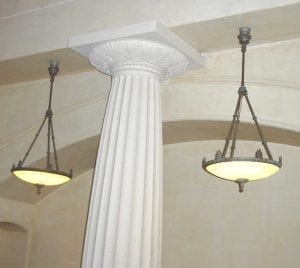 Entrance Hall Columns. Easily the largest of our numerous tasks at these new galleries and in many aspects the most difficult, but for different reasons to those above.

Formed in Glass Reinforced Cement (GRC), these were required to be installed very early on in the construction process. Additionally, as with the above matching desks they were required, to quote our client, “au naturelle”, unpainted to match that light Portland stone colour. Our material was preferred to real Portland stone because under test it proved to be very much harder! 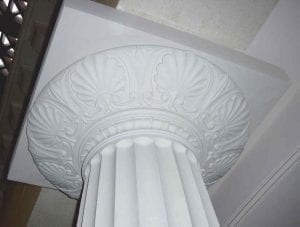 Of true classic design, the shafts are acutely entasised (narrowed) toward the caps, also have an odd number of flutes to their circumference, twenty one in total. This feature alone generated additional tasks at every single stage of production and installation.

Each of these six complete 3200mm long column shafts had its own “personal” rubber tyred wheeled trolley to minimise handling and facilitate transport on the 200 mile journey from our Yorkshire workshops. 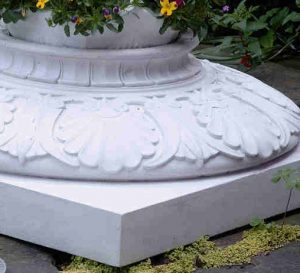 The capitals are also more complex than initially appears. Their leaf pattern corresponds with the shaft flutes, making the capitals “odd”, therefore the anthemion (honeysuckle) enrichment coincides just once in the whole circumference, making setting out that little bit more thoughtful.

If you don’t wish to travel to London to view these very special full columns, we have two similar half columns on the exterior of our workshop / showroom near Dewsbury, address below.