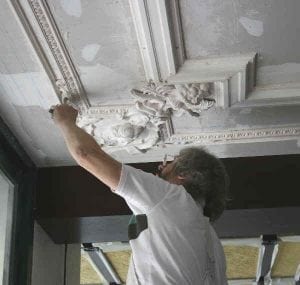 During mid 2007 Ossett Mouldings worked on another super ceiling in a Dutch bar.

Well, in truth it was quite a large complex of 16 bars. Some of these bars were really quite mad and extraordinarily varied in their themes. 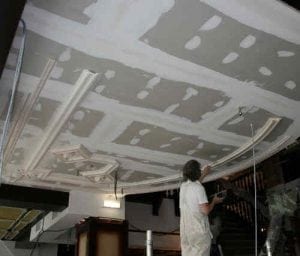 Some components were used from the 2004 job, some new items were specially created. The ceiling was just a little higher from the floor and incorporated a number of changes during the progress of the work. One unaltered item was the neckache!

Again, this was another quite enjoyable piece of work. You can see here the job actually in progress, most of the very many pieces are yet to be placed into position. However most of the setting out is completed by this stage. 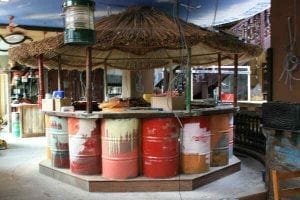 Before I continue to talk about our plasterwork on this project I’ll deviate and show you some of the madness elsewhere here. The cable car, the boat, the hikers walking around at very high level, mountains, rotating bars. Africa, High Church fittings, belt driven fans.

So very many things, so much. Even a glass roof to view to adjacent city cathedral facade through! 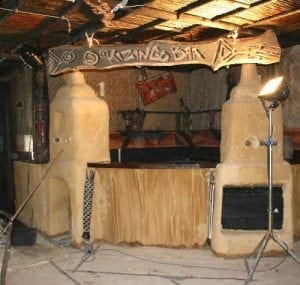 There are many more ‘photos, really interesting bric-a-brac I could illustrate here. But to be truthful I’d really prefer to talk about our work, the plaster stuff!

But before we leave this general discussion I’ll explain that above here is a rotating bar decorated with a facade of oildrums. While to the left here we have an African styled bar. – believe me, there is a lot more to see! 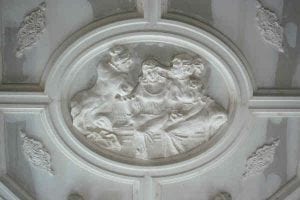 Here on the right you can see a fairly large corner detail. Instead of the clients initials we have a low relief face of an unknown lady. This motif couples up and combines with some of our standard panel designs. These form the complete outer circumference of this ceiling. 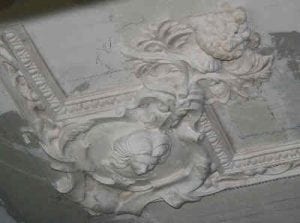 The three end female figures featured above in the original clay, the huge carved ceiling corners, part of the large panel network, the foliage, the figurative heads. In fact far too many items to easily note separately or in detail.

However, as a whole it looks absolutely super! It’s just a pity I don’t have a sufficiently wide lens to show the complete ceiling in the one shot.

More of the work in progress. To our right one can see the ceiling approximately half way complete. The form and design is now apparent. 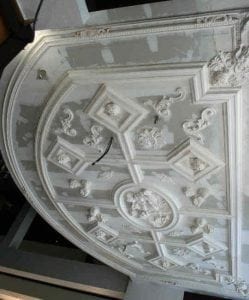 While here, to your left is the almost complete ceiling. The unified design, the “sisterly” theme is perfectly obvious. The only possible regret is that I have not yet seen it painted.

Thanks especially to David Clayton who took a big part in the site works but also took the time and trouble to make these really helpful ‘photo’s. Many thanks David.

But hopefully I will call in and see it decorated. At the time of writing this (August 2007) I really don’t know the intended scheme. But if the rest of this place is anything to go by it really ought to be quite fantastic!

One very important point I’ve omitted to mention is that three years previously we installed a fairly large ceiling design to the same site. This design (well the concept) was also “lifted” from some where else. 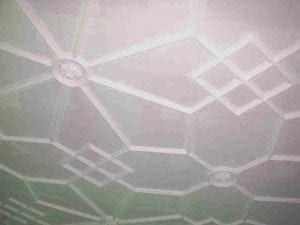 This ceiling was very much more large than that above. Perhaps five times what you can see in this image to the left. The ceiling was decorated with quite a lot of gold leaf and was (I’m told) very good looking indeed when complete. The bars opened and traded enormously well.

Traded very well indeed. For two weeks, until fire burned the whole building down, right to the ground. As the fire was “brewing” behind some wall cladding for some time before hand all the clients and staff were safely evacuated. However I don’t know if the money safely escaped! 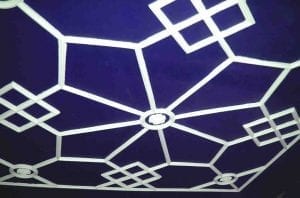 When we installed the first ceiling I estimated the material requirement, badly. If the work is a long or difficult distance from our Yorkshire base I like to take “extra” castings. However this time I returned home with more than enough to build the ceiling here on the right. So, if you want to view this design “in the flesh”, please do call into our showroom and ask to see it.

This fire was quite a big event in Holland. So important in fact that the Netherlands Fire Codes / Construction Materials Laws were amended following this event.