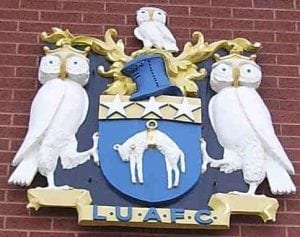 Right, I’m going to tell you a story;-

This story describes our small part in this rather good feature film. The film deals with the other stuff, the “good” things like money, detestation and football, the very few days that the (sadly late) Brian Clough managed Leeds United Football Club. 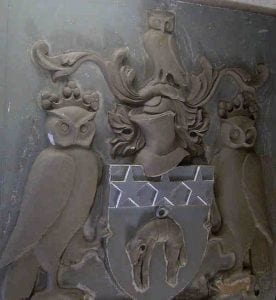 Now It’s (April 2009) about to open – an almost exceptional Leeds World Premiere. This story concerns only our part – creating reproduction items for the production. Firstly we have a 1970’s “retro crest” – just like the one to the right here. This is attached at a fairly high level to the side of the entertainment suite at their Elland Road stadium.

The image above was obtained while Leeds fans were queing for tickets for an important match. From this image, and details from the production’s Art Department our very expert sculptor produced this super clay model you see here to the left – adjusted to the dimensions they required. 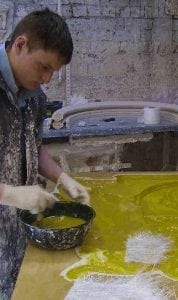 I know most readers have limited patience, therefore I’ve missed out some stages. So now we “jump” to Damian (to the right) actually casting the item. I’ve omitted the clay “dummy/ void” forming, the case making, the silicone injection process, the dismantling, the pattern evacuation, mould preparation. But I reckon you know all this anyhow? 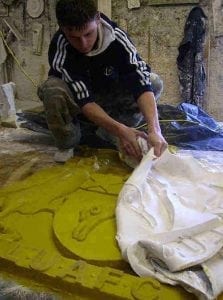 Now, to the left we again see Damian, one of our apprentices in training actually removing the white flexible rubber from the face of the yellow GRP (“fibre glass”) casting.

While to the right you can see this casting being cleaned and finished, again by our second year Apprentice Damian – naturally under the guidance of our very experienced craftsman Richard. This stage is frankly the least interesting part of our work but very nevertheless very important and quite essential. 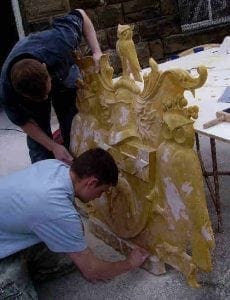 Now, the final image in this long section (left, below) is the completed work, one that we “happened upon” while working on decorative plaster work at the same studio on a quite different production. The things you trip over on “Wuthering Heights”! Or was it “The trouble With Austen”? 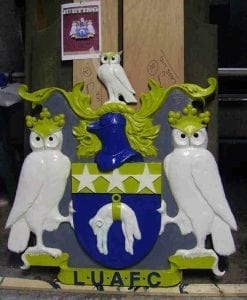 Because this picture is a “period” piece, they needed an older stadium for location filming. They settled on Saltergate, Chesterfield F.C.’s stadium – because naturally Chesterfield don’t have the resources or cash that Leeds F.C. have. Therefore Saltergate is more “antique”.

Now, more seriously we have a further crime to report! This rather super modern artefact was stolen. Stolen out of one of the two construction department hire vans that were “whipped” from the film studio premises. Therefore if you see this rather fetching awfully nice thing – Please tell the cops! 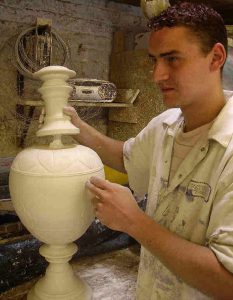 Now, the next job. Well, the only other part we have any photo’s for! But thankfully we do have a few of this one!

OK then, to the right is a photo of the original “First Division Trophy”. This is the actual object that was born in 1888, first won by Preston North End, won by many other clubs since then until the Premier League was formed in 1992 – interestingly by Leeds United! 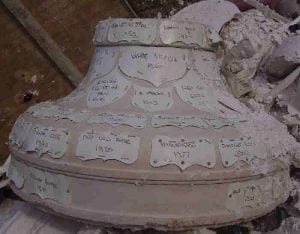 Yet again, our expert modeller / sculptor “turned” the main body of this trophy in plaster. I honestly think this was quite adventurous and heroic! John deserves our gratitude for his daring – I believe!