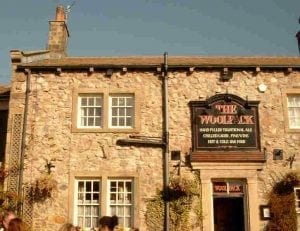 Fairly late on in the year 2003 Ossett Mouldings Limited schemed, made and installed some very unusual components necessary for a disaster in the popular and very long running Yorkshire Television drama serial “Emmerdale”.

To state the very obvious, Commercial Television inhabits a very commercial world. One that needs viewers, very many viewers to exist. 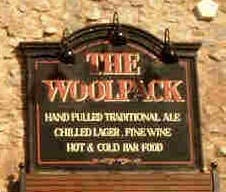 To chase, or better still “beef up” the crucial Christmas ratings, it was decided to have a terrible storm, an absolute deluge complete with destructive lightning and thunder. This was to visit this very Yorkshire village at Christmas – in style!

On this page we will describe as interestingly as possible for you our small part in this event – described at the time as “Emmergeddon” or “Storm in Emmerdale”. 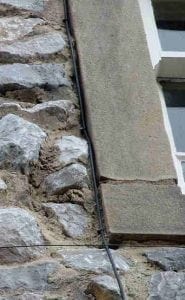 The storm was to damage much of the village, however our work was confined to the front face of the village pub, The Woolpack. The story, as we were told was that a “thunderbolt” would strike the pub roof, immediately vapourising the water contained in the loft tank. This in turn would “blow” a large section of the pub face off – having first bought the chimney stack down, through the roof.

Other people dealt with the “falling stack” and the partial roof collapse. We were to construct the “collapsing face” part of the disaster.

Initially we met with Sue, one of the Emmerdale Designers (Art Department) who stated very specifically what was needed and in which order. The order of action (for us) was that after the stack fell through the roof – our stone face would blow out as if propelled by an internal explosion. 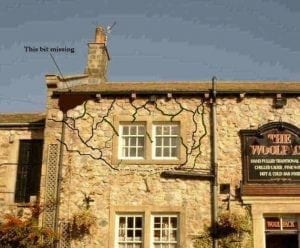 The Woolpack exterior is actually one of a number of recently built timber framed, stone faced structures standing in private grounds, away from public access. We took many photographs for a record so that we could reproduce the external features in plaster. Onto one such photo (here on left) the extent of the damage and the approximate crack lines was imposed to serve as a guide.

Now for the practical work, first we took a plaster impression from the existing stonework. From this “squeeze” a production mould was eventually produced from which many matching, massive “stone” blocks were produced cast in very thick, coloured plaster.

Also using our photographic references we accurately reproduced the stone window mullions, cill and lintels. While we made the components, builders were busy ripping a hole in the front of the Woolpack. 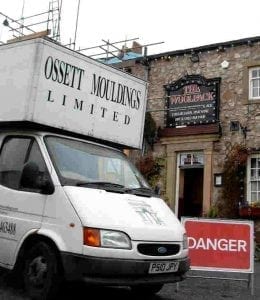 Back on set, our first task was to thicken up the rim of the hole thus created. This was necessary as all the buildings on this set you see here are merely “scenery”, timber framed structures with relatively thin fascias of stonework. 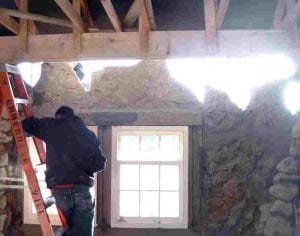 Traditional stone buildings have an inner and outer stone leaf, separated by a rubble infill. This we imitated to the circumference of this newly created hole, using material from the demolition.

Our heavy imitation cast plaster “stone slabs” needed to be carefully installed to match the remaining stone face, to remain safely in place for 2/3 days before filming yet be sufficiently fragile to fall away when required.

These were eventually completed, despite some practical difficulties. The rear was weakened to ensure the slabs broke up in a convincing “stone” pattern as they fell. 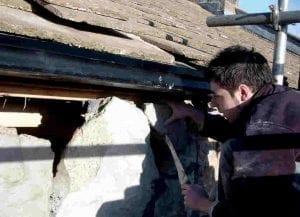 The film industry jargon for a piece of scenery that falls off or smashes is “breakaway”. And this is was a very large breakaway indeed!

For this reason, it was just as well one of the cameras to record this event, from below in the pub “beer cellar” (underneath some armoured glass and very heavy duty timber protection) was unmanned. Because, believe me – a lot of weight fell onto it!

The “storm” made a terrible mess of the village Christmas decorations, upside down Santa’s, broken sleighs – that sort of thing. But you really should see just what happened to the rest of the place!. 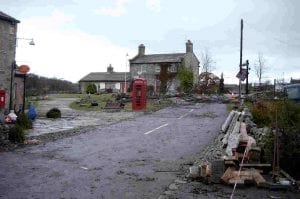 These photos show some of what “the morning after” looked like. Village tree down, bus shelter knocked flat, seat tipped over, pub sign hanging on a thread.

Circular bench squashed flat, muck and rubbish swept down the road. One hundred ten thousand litres of water flung down in one huge lump!

We are waiting (hopefully) for some more photos of the pub and particularly this effect to show up. If they do, please be sure they’ll turn up here for you to see. As you now know, we just love to show our work off! 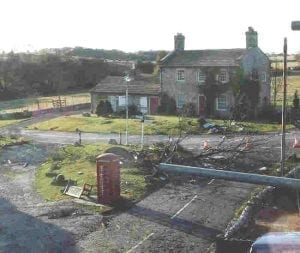 This special effect – for that is just what it was, driven and executed by Ian Rowley, who I believe is the best Special Effects company in our region was “trailered” very heavily in the 10 days or so prior to Christmas 2003, parts of the story line carried into the year 2004.

Sadly I never saw the event, but I’m told it “went very well indeed”. I would have liked to attend the big “shove out”, but considering it took place at 03.00 or 04.00 in the morning, I’m actually quite glad I was not invited!