Also in our very, very busy year of 2004 Ossett Mouldings Limited worked on the really large television production “Casanova”. In addition to being a great deal of work in very little time, this was also really interesting work and to be perfectly honest quite exciting to meet so many deadlines at such little notice. More please!

Our work was (again) so varied, having to produce so many original items of work. The sets depicted interiors across several European cities. For instance Naples, Paris and Venice.

We now know that this set was the only place we saw “Old Casanova”. Perhaps it was our lovely work that inspired Sir Peter O’Toole to such a fine performance. Who knows? 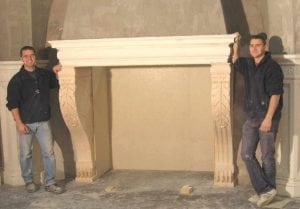 These two pictures show components we made toward “Casanovas Castle”. For just one pair of chimney piece legs we had to carve claw feet, curved flutes, huge leaves and deeply incised “woodcut panels” – left and right handed. Plan, carve, assemble, mould and cast – all in just five days. Please believe me, that is a very demanding programme of work.

Small wonder Frankie and Alan, our two craftsmen pictured above look pleased with their exertions and skill. They also coated the set walls to depict that of an old castle (see above) and created some exterior castle stonework. A fine job men – thank you very much indeed.

The largest set on this production served as a Venetian Salon, A Neopolitan Interior and as a very large Parisien interior set. It also required a lot of work, skill and effort on our part. Some of this work can be seen here.

Yet again, dozens of original carving were needed, also hundreds of individual castings and a great deal of on set installation. These were very expertly decorated by specialist film studio artists – including the fabulous hand painted floor you see here. These complex panel arrangements were completed by inset original artworks. 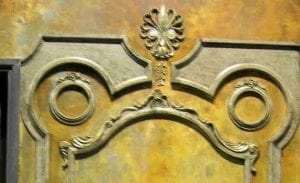 All the illustrations in this block depict bits of the “Venetian Salon” set. It is large and very ornate, also it looked utterly beautiful when completed! At risk of repetition, like so much of our work it was very, very enjoyable.

A great many components were created, moulded, cast, transported to a Manchester film studio. All in a very, very limited amount of time. 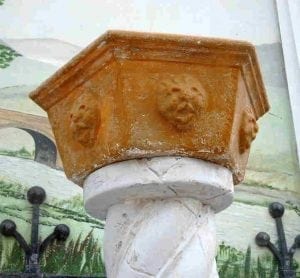 Well, not actually “Dubrovnican”. It was, I believe a Venetian “Village Square” water fountain. I’ve called this Dubrovnican because that is where this nice item was taken to be filmed after we created it.

This was made in GRP (“Fibre Glass”). As with many other illustrations, these show the fountain in it’s raw colours – unpainted. Also note the deliberate “damage” (cracks & etc.) to “rusticate” the fountain.

We are reliably informed that this item was not broken up. Thankfully it found a good home somewhere after the production was completed. I expect it to last a very long time because it was made very well indeed!

This had to be “practical” in many ways, the large water tank held a great weight of water, a pump was installed to drive the large flow, it had to take the weight of actors sitting / standing on it, be capable on dismantling for transport and distant reassembly. 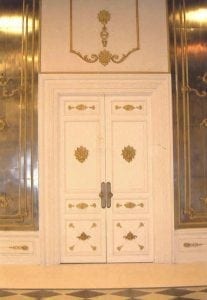 In the general style of the “mirrored hall” at Versailles (you know, the one where the Great War Armistice was signed). As at the Chateau Versailles, mouldings were applied to mirrors.

Below we have two wider views of this super set. Again, just look at the fine job the specialist studio painters made – including another brilliant hand painted floor. 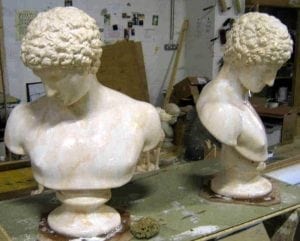 Or some of the very many miscellaneous items that were made during the course of this production. Generally these items can be termed “props”, our task here being “prop making”.

These pictures show a reasonable selection of these many specially created items.

Here on the left are just two of six similar male busts. Below are two shots of a dog and an absolutely mad “gargoyle”.

The final picture in this selection is one of very many cherubs / babies we also made. If you have any thing you need making, please ask us.