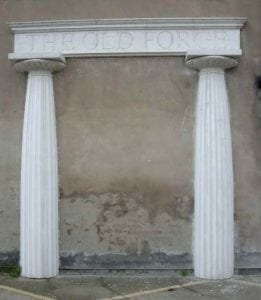 We continually seek ways to display our skills and display the possibilities of our materials. During the year 2002 a fine opportunity arose which we (naturally) took.

Some surplus materials, components and time combined very nicely together to form and erect the relatively low relief item you see here on the right.

All these items were cast in weatherproof Glass Reinforced Cement (GRC). As it’s name suggests, it is a combination of cement, alkali resistant glass strands and cement. Believe me, it produces an enormousely hard, weatherproof surface. It is even possible to manufacture fully functioning boats from GRC!

The top, horizontal section is a specially formed one piece casting, over four metres long with joints carved into the surface with the lettering. The classical half columns also have horizontal joints carved into their surface. The finish is “natural”, unpainted. It has been in place for over 15 years now, it has weathered nicely and not discoloured at all.

Once the frame was installed, a specialist was contacted, designs considered and the idea of a mural began to properly form.

The artist is correctly a very local man, Mr Keith Jones who helpfully “knocked up” the preview / artists impression you see here on the left.

The view depicted is based very much on the view one would see out of the door in the “caff” at Burnsall. Burnsall is in the Yorkshire Dales.

As John Clayton now retired in 2014  probably cycling this route as you read this considers this view to be one of the very best they see in Yorkshire, it was therefore chosen for this mural.

All this was fine, but we are, after all promoting our goods and products and some suitable GRP (fibre glass) black railings were included in this scheme, not just for that reason, but to give some depth to the image and a small degree of protection to it. 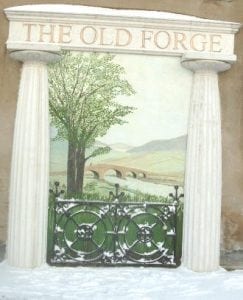 This is the nearly complete job, the lettering is now picked in gold, (Back in 2002) Keith has painted the mural and the railings are installed. The “prongs” that were vandalised during the first night were promptly replaced. More robust versions of these are already fixed in place.

While it’s not too apparent in this picture here (right), it really has captured the “feel” of the Dales, it really is obvious “in the flesh” that it’s a Dales scene. The snow however is real, I simply took advantage of an interesting (and rare) photographic opportunity in March 2004!

One, well two last touches, first all the (real life) motor cars just HAD to go, secondly we included a cyclist approaching Burnsall over that distinctive bridge. We may at some future date add the ever present Burnsall ducks and perhaps one day a mate for that lone cyclist!

Unfortunately due to weather circumstances & vandalism the new  Managing Director of the company Alan Harding who had taken over from John had to cover this up in 2014 sadly. (Sorry John)

Sadly The Finished Yorkshire Mural cover up in 2014, See more of what this looks like now?