A High Ceiling in a Low Country 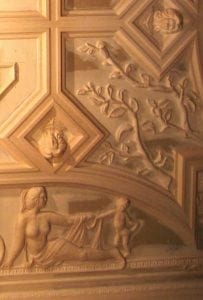 Throughout almost the whole of the year 2004 Ossett Mouldings Limited worked on a truly fabulous ceiling at someone’s home in a Benelux nation.

The inspiration for this arose on a visit to a large department store in a neighbouring nation. The stores ceiling design was adapted and scaled to suit the dimensions and particular requirements of this client and the actual home. 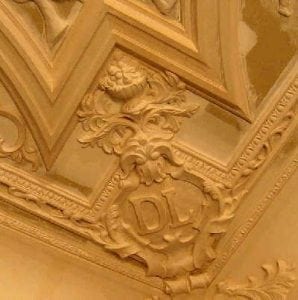 It was difficult to create so very many features by hand. Forming sculptures, original items and carvings entirely from scratch in decorative plaster work. This job was very physical, awkward and mentally demanding. In some very unusual ways, these I’ll tell you about later on this page!

Despite my moaning this was, quite truthfully a very, very enjoyable job to do. All of us thoroughly enjoyed this work, all of the very many weeks and months it took us to do it! 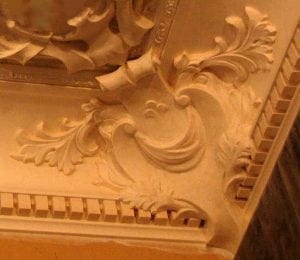 A large number of reference photographs were taken of this distant original ceiling. Also very many dimensions and measurements. This was necessarily followed by quite a lot of work in drawing, scaling, proportioning and adapting this design for a quite different property.

This process actually took quite a few weeks to accomplish. For instance the original working drawing needed no less than eight major revisions! 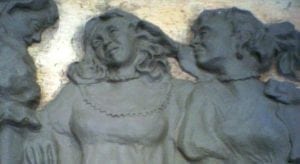 In truth I have very little idea just how many individual original clay sculptures were produced for this ceiling. All I know is that there was a lot – a great many sculptures and items of modelling!

The original sculpture here, on the left is just one example. The three related female figures were sculpted in clay, then very heavily amended. – more than the once! 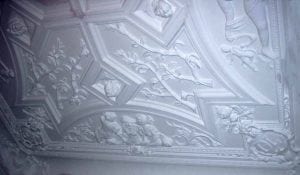 Here on the right you can see perhaps just one third of the completed ceiling. Even on this fraction there is a huge amount of detail.

The three end female figures featured above in the original clay, the huge carved ceiling corners, part of the large panel network, the foliage, the figurative heads. In fact far too many items to easily note separately or in detail.

However, as a whole it looks absolutely super! It’s just a pity I don’t have a sufficiently wide lens to show the complete ceiling in the one shot. 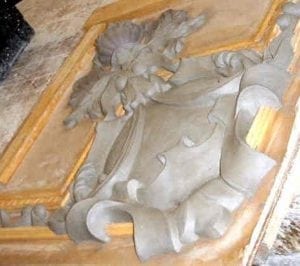 Two more of the very many original clay sculptures specially created for this fabulous ceiling. On the left, two heads within the central octagon, to tour right a large, very ornate complex leaf panel. 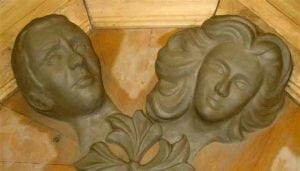 These clay carvings were not simply applied into “spare spaces” between plain ceiling members. They are wound around, integrated into and bound up completely as a carefully designed whole ceiling. 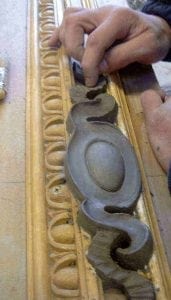 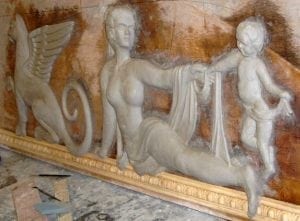 In this block one can see four separate clay modellers work in progress, also complete items. Yes, there really was a great amount of work to do!

Yet again, so many items to create! Figures, patresses, cherubs, leaves, heads, ribbons, diaphanous raiment, griffons and so very much more. 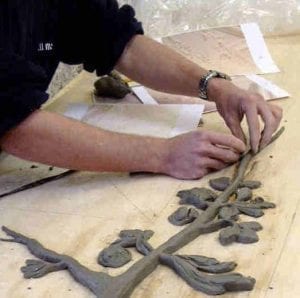 This represented a lot of planning, sketching, drawing and fitting together of componentry. Thankfully all the planning was correct and the pieces fitted together rather nicely! 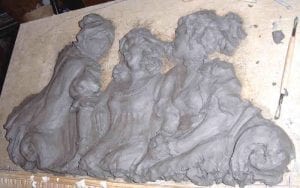 Here we have a couple of ‘photos “left over” from above that I’d like to include on this page. Unfortunately there are some features of this ceiling that were not photographed.

When / if any more or better photos turn up I’ll put those up here. Possibly soon – who knows? 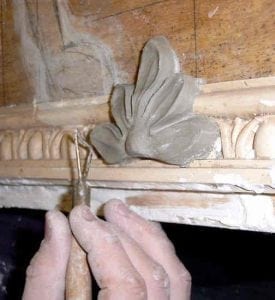 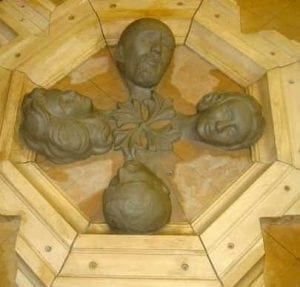 The only real moan I had was the incredible neckache we got from working on a ceiling for so many hours and days. It was about two weeks before our necks got straight again!

Yes, even so this was yet another project that we thoroughly enjoyed. We really did get a great deal of pleasure off this job. Hopefully there will be more to do in the future. I sincerely hope so.